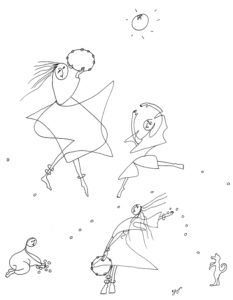 Last Monday, a group of women gathered in the Merchantville Community Center for Woman at Play: Goddess Restoration Project (click to see the trailer). My goal was to create a magical space for women to share the electricity generated over the course of the first Mother-Daughter Way journey, and to open the gates for the next one (click this link for info). My pilot group included women from as far as Reno, Nevada and as close as a block from my house. For the Goddess Brunch, I joined with my local flight instructors to create a warm and welcoming environment for women to get their Goddess on.

Each Goddess attendee wrote her mother’s or daughter’s name and a word or phrase that evoked her.

My mother’s voice rang in my ears with a familiar injunction:

Other’s mothers became known to us by their words:

“A woman who will tell her age will tell anything.”

“You need to set the intention.”

“You can be whatever you want to be!”

From the voices of daughters we heard:

“What do you want to know?”

To listen to stories from members of the pilot group, click this link.

The choice of the Community Center was relevant because, almost thirty years ago, I’d been part of a wonderful group of friends and neighbors who decorated this beautiful, historic Tudor mansion to kick off what became Main Street Merchantville. That restoration movement was designed to bring energy back to our historic downtown. This time, we focused on woman energy and the dignity of those who speak up and plug into their elemental power source.

This event also evoked the good energies of the first Goddess Brunch in 2000.

At that time, my mother was battling breast cancer, and it wasn’t going well. A friend told me I should prepare to lose my mother. I thought. “How do you do that? I just want to keep her.” Then I came up with a plan. I’d heard that the highest incidence of death by heart attack was on Monday mornings, and I thought, “Hmm, that’s because people are going back to work and they’re resisting, and there’s a lot of pain around that, and stress.” I realized one gift of my mother’s battle was the way it focused me. What really mattered was to be present with my mother. As an entrepreneur, I was a work-a-holic, and I knew I wasn’t alone in that habit of rushing around, blinders on, always busy.

I also recognized that I needed support to ease into the transition of life without my mother. My first thought was to look to other women. I had been teaching and studying yoga, and in that community I had found a plugged-in energy source of gentleness and wisdom.

One late October Monday became the first Goddess Brunch, with red envelope invitations mailed to my yoga friends, writer friends, and women friends who might be bold enough to take a Monday morning off for themselves, and participate in a supportive circle, enjoy a festive brunch, and claim that particular random Monday as theirs. Everyone loved it so much they said, “Let’s do it again.” I did it again six weeks later, and then a few more times. Those Goddess Brunches were like weddings for ourselves. For me, and some of my friends, cooking can be a meditation and a gift. But there was no requirement to bring anything, or share unless you wished to share. And that was a core value.  I lovingly prepared these brunches for women who I knew would support me in what I was going through, and whose journeys would illuminate my journey.

Before long, the Goddess Brunches  became so popular that the Courier-Post wanted to publish an article about them.

I was horrified. “No. This is an intimate, private circle, a sacred place for women to be honest about what they love about their life or what’s weighing on their heart, and to share, and to have no expectations that they’re going to produce something, or impress anybody in order attend. The last thing we need is a news article about it.” Although I ran a publishing and public relations company, and yes, it may have been good business to have an article in the paper, I valued authenticity over publicity.

The Goddess Brunches of that era continued for a while, morphed into potlucks at various homes, and then they lost momentum. I was dealing with my mother’s death, and I began leading Artist’s Way circles, chakra balancing workshops, and delving into my own literary writing. I formed and participated in various writer’s workshops. After my mother’s death, I earned an MFA in writing. I curated her art work for a catalog and various exhibitions, and I depended upon my practice of poetry and writing to process the emotion of going so deeply into my mother’s life story. When I published Alice Steer Wilson: Light, Particularly, I took my mother-daughter story on the road. And I was surprised at what I found.

In the course of talking about my mother’s art and my work on her behalf, I tapped a vein of longing among women, everywhere I went.

What I offer is a transformative journey for anyone who finds herself overworked, over-scheduled, forgetful, humorless, overweight, unhappy, stuck, inundated with stuff, overwhelmed, or muted.

The opportunity is to unmute, to disconnect from the shoulds and to plug into your woman power, which means honoring the mother and the self, honoring the mother-daughter relationship and sorting it out. That is the pain point for so many women.

I’ve helped and benefited from sharing the journey with women who had no problem with mother or daughter, but they had lost their practice of self-care as they cared for others. This common blindness among women is often paired with work-a-holism in a lack of respect for what you need, and a lack of permission to invest time, or resources in self.

If you have been reading my blog, and you’ve been interested, but you haven’t stepped up, it’s not too late. There are few seats left in the next Mother-Daughter Way journey, which will start in a couple weeks. You need to apply now (click this link) because it’s filling up fast, and there aren’t  many seats left.

You know if it speaks to you, and I would love to process this with you, to make sure that it’s a right fit. If it is, it’s awesome! So shoot me an email or a comment below. I’d love to hear from you.

Enter your Name and Email to Learn More